The decision by negotiators from the E3+3 (France, Germany, the United Kingdom + China, Russia, the United States) and Iran to prolong the talks over Iran’s nuclear programme is disappointing. The long-duration of the extension (seven months) and the lack of any agreed framework describing parameters of a future compromise do not bode well for a resumption of the talks next month.

The main risk now is a loss of political momentum. After a year of intense, almost non-stop talks between the E3+3 and Iran, the anticlimax of 24 November might well drain the energy from negotiators. The context for a comprehensive solution is unlikely to improve over the next few months. Even if some participants spoke of new ideas that had been introduced at the last minute, it is difficult to believe that any novel solutions might suddenly kick-start the talks.

A lack of ideas on how to bridge existing differences (particularly on uranium enrichment and sanctions) was probably not the main reason for the failure to agree on a Comprehensive Joint Plan of Action in Vienna. The meagre outcome is better explained by the domestic constraints under which the two main protagonists – Iran and the United States – acted. During the final months of the talks critics of engagement in Teheran and Washington drew red lines that the negotiators Vienna apparently did not dare to cross.

European partners should undertake a concerted effort to overcome these gaps. When Joschka Fischer, Jack Straw and Dominique de Villepin took a considerable political risk when they travelled to Tehran in October 2003 to undertake the first attempt to peacefully solve the conflict over Tehran’s nuclear programme . Subsequently, they became the fathers of the current talks. For the next years, the E3 worked hard and successfully to prevent a military escalation and keep diplomacy alive. Yet, Berlin, London and Paris were relieved to hand over the political initiative to newly-elected US President Barack Obama in 2009.

Now, the time has come to revive Europe’s lead role. The E3 should reclaim the initiative by arguing that requirements for limits on uranium enrichment capabilities be relaxed in favour of more stringent and durable verification and monitoring arrangements for Iran’s nuclear programme. The E3 could also offer to Tehran sanctions relief over and beyond what the Republican-dominated Congress might allow the Obama administration to propose. In return, Iran should be more forthcoming on a clarification of what past efforts it undertook to develop nuclear weapons and stick to its pledge not to produce weapons-grade plutonium. Such a deal would provide additional security that Iran cannot breakout rapidly from a long-term agreement while providing economic incentives for Tehran to stay engaged. Like eleven years ago, Europeans have little to lose and much to gain from a courageous effort to save diplomacy. In the end, a slow demise of the nuclear talks is a much greater risk than the possible embarrassment of a failed diplomatic push for a durable solution.

ELN Associate Fellow Benoît Pelopidas argues that differing national interpretations of the Cuban Missile Crisis dilute the perceived lessons of the crisis, and as such undermine its usefulness as a model for the management of future nuclear stand-offs.

Brazil and the CTBT

Ambassador Duarte argues that the CTBT must become a universal legal norm for the benefit of the international community. 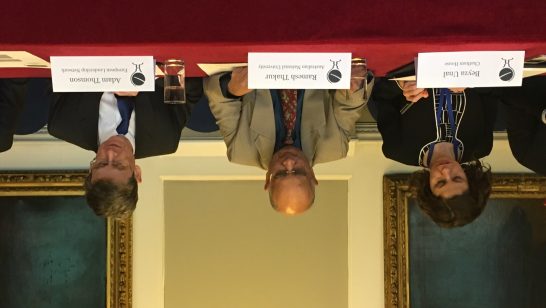