“After Munich, we saw the situation was changed, the country became united, the people voluntarily joined the various defence societies, the private groups and rights relinquished their rights.” This quote, written by former US President John F. Kennedy in his book Why England Slept (1940), epitomises a sudden change in behaviour within British society and international affairs towards Adolf Hitler’s threats of war – from appeasement to confrontation.

Today, we see a similar political and societal behavioural change in Europe. While Moscow’s invasion of Crimea and Donbass back in 2014 was a first opportunity for Europeans to confront Russia, there was generally an apathetic attitude towards Moscow (with the exception of some European countries) and by and large, Europeans underrated President Putin’s threats and the build-up of Russian military power near European borders. The Kremlin’s unprovoked and unjustified military aggression on February 24, 2022 changed this.

Suddenly, with Moscow’s full-fledged invasion of Ukraine, the European public and political leaders became emboldened and united in condemning Russia’s belligerent behaviour. There appeared to be a once-in-a-lifetime unity and coherence among Europeans in support of economic sanctions against Moscow, a renewed appetite for military and defence, advocacy for an exceptional humanitarian and refugee policy (at least within the EU), as well as unprecedented solidarity toward the Ukrainian people. More than a shift in Europe’s security environment, which is already reshaping the nuclear order, the war in Ukraine is a turning point in Brussels’ approach toward Moscow.

Despite this, Europe’s reaction has been ‘too little too late.’ The Russia-Ukraine war has revealed Europe’s inability to protect the Ukrainians and to deter Russia from invading Ukraine, as happened in the 2014 Russian annexation of Crimea. Why did Europe fail to prevent this war?

First and foremost, due to security idiosyncrasies. Europe is not a collective security guarantor. It dismissed this opportunity in 1954 when France refused to establish a European Defence Community (EDC). Thus, despite continuous efforts ever since, Europe does not have an army nor a deterrent capability. It is, in fact, highly dependent on NATO and individual nuclear powers (predominantly the US and, to a lesser extent, the UK and France) to guarantee its collective security.

However, the Russo-Ukrainian war displays the Euro-Atlantic community’s inability to maintain security assurances previously given to Kyiv under the 1994 Budapest Memorandum. In this political agreement, the US, the UK and Russia pledged not to use military force against Ukraine in exchange for it renouncing the nuclear weapons it had inherited from the Soviet Union. Russia violated this agreement at least twice – with the 2014 annexation of Crimea and the 2022 invasion of Ukraine – and the Euro-Atlantic guarantor countries failed to protect Ukraine.

Given the inability of major nuclear powers to uphold the Budapest Memorandum and the difficulty of enforcing credible security assurances due to Moscow’s actions, Ukraine proposed, on 29thMarch, security guarantees in which guarantor countries (such as the P5) must consult each other within three days after the beginning of military aggression or hybrid war. Within this scheme, after consultations, this group of countries must provide aid to Kyiv by sending troops, supplying weapons, and protecting Ukraine’s airspace. Ultimately, this proposal would exclude security guarantees potentially given by NATO or the EU and would ‘deresponsibilize’ Europe as a collective security guarantor of Ukraine.

The second reason Europe failed to prevent Putin’s war in Ukraine is because of nuclear policy choices. The EU is basically a non-proliferation actor (not a nuclear deterrent one) who supports the NPT as the cornerstone of the global nuclear disarmament and non-proliferation regime. Since Ukraine’s independence in 1991, the EU has shown that its interests lie primarily in the physical protection of nuclear facilities and materials of the former Soviet states, leading to the establishment of TACIS. Indeed, Brussels proved to be more concerned about the energy aspects of nuclear security, generated mainly by the outcome of the 1986 Chernobyl disaster, than with the territorial integrity and sovereignty of Ukraine.

It was only in the aftermath of Moscow’s invasion of Crimea and Donbass in 2014 that the EU’s Russia policy took Ukraine’s security seriously into account. But Brussels did not provide nuclear deterrent capabilities against Russia for the reasons stated above and, most importantly, as it is a de facto NPT regime guarantor.

The EU is critical of the view that more nuclear weapons can induce stability and decrease the chances of crisis escalation (nuclear stability theory), prominently defended by neo-realist Kenneth Waltz. As an NPT regime guarantor, Brussels supports the idea that nuclear proliferation is potentially the greatest threat to international and European security, requiring a concerted and multilateral response. For example, the 2003 EU Strategy against Proliferation of WMD stated that the spread of nuclear weapons to additional states not only increases the likelihood of interstate nuclear conflict but increases the chances of nuclear material falling into the hands of violent non-state groups who are free from the threat of nuclear retaliation.

Therefore, the EU has been more politically engaged in ensuring Kyiv would not obtain nuclear weapons (mentioned, for example, in Article 11 of the EU-Ukraine Association Agreement) than in providing Ukraine with some kind of ‘security (nuclear) umbrella’.

The third reason is due todivergent political interestsamong EU member states.Since March 2014, the EU has adopted a strict non-recognition policy regarding Russia’s illegal annexation of Crimea. This policy led to substantive sanctions against Russia and prompted the EU to agree on five guiding principles to punish Russia’s aggression against Ukraine. However, these actions did not deter Moscow in Ukraine nor prevent the EU from negotiating trade and energy deals with Russia. A lack of coherence among EU members affected the effective implementation of the guiding principles and restrictive measures due to different political interests and positions towards Russia conditioned by threat perceptions, economic interests,and energy dependence.

Europe’s energy dependence is another conditioning factor of political divergence within the EU. For example, the impact of Russia’s policy over EU politics towards Ukraine, especially through its bargaining power in the energy sector (namely through Russian business proxies Nord stream and Gazprom), led the Union to become more inactive and less effective. Other Russian activities – such as increased activities of Russian funded media, intensified contact between Brussels and other European countries with Moscow, the spread of disinformation, and the sponsoring of Eurosceptic political forces – impacted the ability of the EU to act effectively in opposition to Russian aggression.

Furthermore, while the implementation of the EU-Ukraine Association Agreement served as an important display of the EU’s economic and political force (soft power) towards Kyiv, Russia continued to be one of the EU’s main economic and trade partners. In fact, European countries with different economic interests continued to negotiate large trade and energy deals with Russia at least until February 2022.

This contrasting dual approach led to, even if indirectly, the continuous funding of Moscow’s aggression machine in Ukraine. For example, despite the 2014 EU arms embargo, according to a recent report, ten EU member states (France, Germany, Italy, Austria, Bulgaria, Czech Republic, Croatia, Finland, Slovakia and Spain) exported weapons to Russia until at least 2020. These countries relied on the use of a legal loophole in EU regulations that allowed the continuation of arms exports “contracts concluded before 1 August 2014 or ancillary contracts necessary for the execution of such contracts”. These legal loopholes, combined with other conditioning factors of political divergence, contributed to the half-hearted implementation of the EU sanctions policy.

Ultimately, Europe could not prevent a Russian military invasion of Ukraine because of the EU’s security idiosyncrasies, nuclear policy choices, divergent political interests, energy dependency and ineffective sanctions policy on Russia. Despite its failure to prevent the war, Europe has taken relevant steps over the past two months to respond to the invasion: They have rapprochement with their Atlantic allies (the UK and the US) and, among other initiatives, have established a Strategic Compass on Security and Defence, which could represent a unique opportunity for the EU tobecome a “more assertive and decisive security provider”.

On the road to becoming an effective global security actor, the EU needs to: 1) avoid strategic cacophony among European countries; 2) end Europe’s energy dependence on Russia; 3) promote a dominant European defence industry (namely in providing weaponry and other military resources to Europe); 4) keep on promoting an equal partnership between the EU and NATO; 5) create a European army; 6) become independent from US security guarantees; and 7) provide a nuclear deterrent alternative that is complementary to NATO without jeopardising NPT commitments.  Only then will Europe possess real ‘Strategic Autonomy’ and an ability to deter and manage future armed conflicts in its neighbourhood. 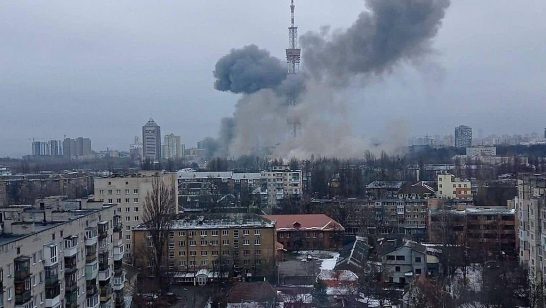