The letter was published in the Wall Street Journal on 24 January 2014 and is available here.

We strongly welcome and support the agreement with Iran reached in November and the recently announced implementation of the Joint Plan of Action (“Iranian Nuclear Accord Advances,” page one, Jan. 13). The plan is a step toward a negotiated solution to the problems raised by Iran’s nuclear program and a step away from the risks of a further conflict in the Middle East, which would be seriously damaging to all.

We trust that all parties will now work expeditiously and in good faith to reach a comprehensive deal that will secure a credible and verifiable set of arrangements for the civil nuclear industry in Iran precluding any capacity or intention to develop a nuclear-weapons program. While that negotiation is under way, we urge that no steps be taken either by Iran or by the other parties to the interim agreement that might jeopardize a successful outcome.

We recognize and respect Israel’s security concerns as well as those of other countries in the region, but we believe that those concerns will best be met by international arrangements that are consistent with Iran’s rights and obligations as a nonnuclear weapon state under the Nuclear Non-Proliferation Treaty and over time, by the establishment of a zone free of weapons of mass destruction in the Middle East.

All signatories are members of the Top Level Group of U.K. Parliamentarians for Multilateral Nuclear Disarmament and Non-Proliferation, which is administered and supported by the ELN. 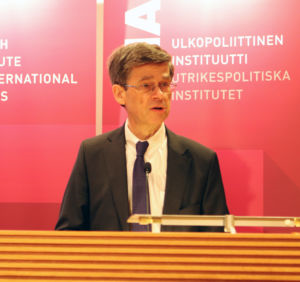 As part of the FIIA-led research project, ‘New challenges for strategic deterrence in the 21st century’, part of the implementation of the Finish Government Plan for Analysis, Assessment and Research for 2018, Sir Adam Thomson speaks to an audience on nuclear arms control.