Today Parliament will debate and vote on the principle of replacement of the UK’s Trident nuclear weapons system. This is a major decision for the future security and defence of the United Kingdom. The government wants to commit the country to this particular weapons system until the 2070s, and it comes with a massive price tag of up to £41 billion.

The vote comes only two weeks after the release of the Chilcot Inquiry report about the UK’s role in the Iraq War. Chilcot’s findings have rightly unnerved parliamentarians and raised serious questions about decision making at the highest level.

Surely, scrutinising the government is one of the key functions of parliament? Parliamentarians should be asking themselves why parliament offered such little challenge to the assertions made by the government thirteen years ago, even when the decision was as serious as taking the country to war.

Today, despite the importance of the decision about the future of the UK’s nuclear deterrence, we will inevitably see yet another example of parliament voting in favor of the government without serious debate or accountability. The government is already making major investments that takes the country down the path of replacement of the current Trident system. Yet there remain a number of key issues that have not been at the forefront of the current debate but will have significant influence on the outcome. If parliament was doing its job properly, this vote would have been delayed until the government had paid due diligence to the following issues:

1. Do the four existing Vanguard submarines that make up part of the Trident system need to be replaced now? If so, what is the date beyond which they would become unsafe and unreliable if not replaced?

(Over the past decade the end-of-service dates provided by successive governments for both the submarines and warheads have changed with little or no explanation or accountability from the government to parliament or the public).

2. Do we need a new nuclear warhead? If so, when will warhead replacement be necessary?

3. What are the total costs for replacing the Trident system? The government has so far refused to provide any transparency into costs for Trident even though Crispin Blunt in an interview with Reuters claimed that the cost was an estimated total of £167 billion over the duration of the system’s life.

4. What’s the plan for an alternative site, if there is a second referendum in Scotland and this time Scotland votes for independence? The Scottish National Party has stated that an independent Scotland would not accept nuclear weapons on its soil and according to experts there are very few, if any, alternative sites that would be appropriate.

5. What are the technological developments which will impact both the threats we face and the vulnerability of our nuclear systems? Are we assured that we can continue to protect our systems against evolving cyberthreats?

6. What are the long term threats we face and how are these threats being countered; what is the role of our nuclear posture in deterring these threats over the next several decades; and what will the strategic environment look like during the lifespan of the renewed submarines (up to the 2070s)?

7. What is the rationale behind our continuous at sea deterrence (CASD) and can it assuredly protect against current and future security threats? Would an enemy really be more likely to attack the UK, if it knew we no longer had a policy of CASD?

Is the lesson of Chilcot not that parliament should approach a major decision such as the renewal of our nuclear deterrent with caution, demanding accountability from the government and reaching out for independent technical expertise as needed? If not, we are at risk of finding ourselves in the future undergoing another Chilcot-like report asking why we spent billions of pounds and severely limited our defence options on a nuclear system that has since been made defunct.

Lessons of NPT’s extension for the next Review Conference

25 years since the indefinite extension of The Nuclear Non-Proliferation Treaty, how can the story of the extension provide hope for the next Review Conference? 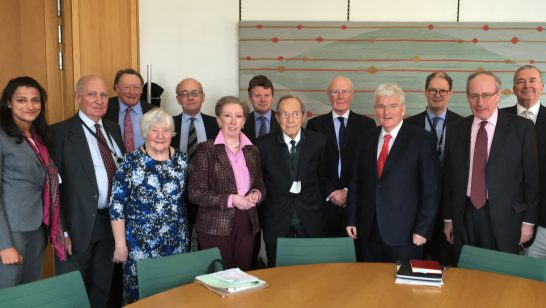 The “Austrian Pledge” on nuke elimination will make a difference

John Loretz argues that “the Austrian Pledge” completes the transition from learning about the humanitarian impact of nuclear weapons to acting upon the evidence and pursuing a ban treaty.