President Barack Obama is right to pursue diplomacy on the Iranian nuclear program. Iran’s stated willingness to engage in time-bound and results-oriented talks is welcome and must be put to the test. That is, if a peaceful solution can be found, it would show that positive results can flow from cooperative international action. A diplomatic resolution would demonstrate that the recent US-Russia breakthrough on chemical weapons in Syria—often described as Iran’s closest ally—was not a one-off event. Further, a resolution could avoid upsetting the unity of the so-called E3+3 countries—China, Russia, and the United States, along with France, Germany, and the United Kingdom—that would likely result if the United States set out to use military force in Iran.

Not only is Iran critically important to Russia, it is a test case for European Union security and foreign policy cooperation.

The Russian viewpoint. From Russia’s perspective, military escalation against Iran would be another attempt to increase US influence in a region that is strategically important to Moscow. Russia has made reference to the US military footprint in Turkey, Turkmenistan, Kyrgyzstan, Afghanistan, Pakistan, and elsewhere; in fact, it did so in its 2010 military doctrine, where it listed “the deployment of troop contingents of foreign states or groups of states on the territories of states contiguous with the Russian Federation” as one of the main military dangers facing Russia. Analysts are in little doubt that the United States is Russia’s main concern in this matter.

Russia is also concerned that instability in the Middle East could inspire even more friction in nearby former Soviet states, like Georgia, Azerbaijan, Armenia, Turkmenistan, and Kazakhstan—and ultimately spread to Russia’s own borders.

It is in this context that Russia is strictly opposed to any military confrontation with Iran, as it could provoke Tehran into supporting radical Islamist, anti-Russian movements and secessionist groups in the Muslim regions of Russia and the Central Asian states. This would mean instability not only close to Russian borders but also to some of its important trade and energy-export routes.

It is hard to overstate the level of these Russian concerns. After two decades of declining influence abroad and significant chaos, turbulence, and instability at home, stability and security both inside and near the country are the centrepiece of President Vladimir Putin’s politics, and of much of the establishment that still supports him.

In the event of a US military strike, Putin may suspend all collaborations with the West. He would want to avoid the impression that Russia feels obliged to cooperate with the United States in such endeavours.  As a result, important world-security matters would be left unattended: Cooperation on Afghanistan will deteriorate; the global fight against terrorism could become a patchwork of sporadic efforts by individual states rather than the deeper collaborative work among major powers that it could be; past successes in nuclear weapons reductions, non-proliferation efforts, and nuclear security agreements—such as the new bilateral framework on threat reduction signed in June 2013—all could become casualties.

The EU viewpoint. For the European Union, too, war in Iran would pose fundamental problems. The European Union has an interest in showing that its dual-track approach—the prospect of closer political and economic ties with Iran combined with sanctions—has not yet reached a dead end.

In the face of a strike on Iran, however, the European Union would have to admit that this policy is bankrupt. EU member states, moreover, would find it impossible to maintain a common approach, and the spectre of these states’ divisions over the Iraq invasion would again loom large.

Even in the wake of the recent refusal to take part in military action in Syria, the UK parliament could possibly support a strike on Iran and even win France’s support. Iran is not Syria, and the consequences of a nuclear-armed Iran are thought to be even more dangerous than Syria’s chemical weapons arsenal.

But European states such as Italy and Greece, fearing the ripple effects of yet another major conflict in their already chaotic southern and eastern neighbourhood, would be likely to oppose military action. Germany’s reluctance to engage in a military response in the absence of a UN Security Council Resolution—which, given Russia’s position, will not be forthcoming—is also well-known and unlikely to change soon. A scenario in which the United States would take military action against Iran— while some European countries supported it and others did not—would damage the European Union and any claim it has to coordinate common European positions on some of the world’s most intractable problems. Iranian-backed terrorist activity in Europe, as the nearest representative of the West, could also increase, if Obama administration briefings on Iran earlier this year are to be believed.

The danger for the European Union is that it is left looking weak in the face of security threats; the case for a common foreign and security policy might be weakened just as the European External Action Service (EEAS)—the EU’s diplomatic arm—has enjoyed plaudits for its role in managing tensions between Serbia and Kosovo and for the effectiveness of EU sanctions imposed on Iran to date. More recently, the EEAS has been characterized as moving from a phase of introspection and concern with its own organization, to a phase demonstrating more capacity for international leadership. In a world of increased challenges in Asia, where the United States needs Europe to be a more effective partner in international affairs, the Obama administration has little to gain from this recent progress being disrupted and much to lose if Europe slides back into intense internal division.

Diplomacy is essential. Ultimately, there may be no option to military action on Iran or, at an absolute minimum, a willingness on the part of the United States to contain a nuclear Iran through extended nuclear guarantees to Saudi Arabia and others in the Middle East.

Given the stakes, though—for future cooperative international action on weapons of mass destruction, for the United States and the West’s relationship with Russia, and for the unity and effectiveness of the European Union on the international stage— adopting any other policy than diplomacy first would be irresponsible.

This article was originally published by the Bulletin of the Atomic Scientists on 11 October 2013, available at: http://thebulletin.org/limits-international-cooperation-iran

Senior political, military and diplomatic figures from across greater Europe express their concern over an inter-state conflict over Syria and support measures to fight ISIS whilst bringing the Syrian conflict to a close. 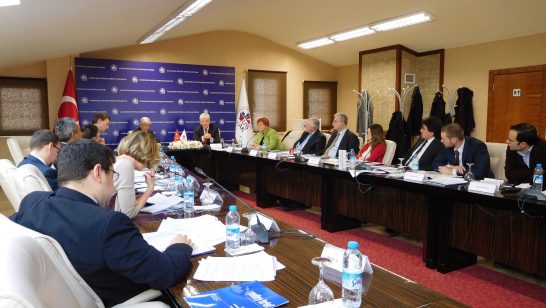 The Task Force on Cooperation in Greater Europe met in Ankara on 17th March to discuss the situation in the Middle East.